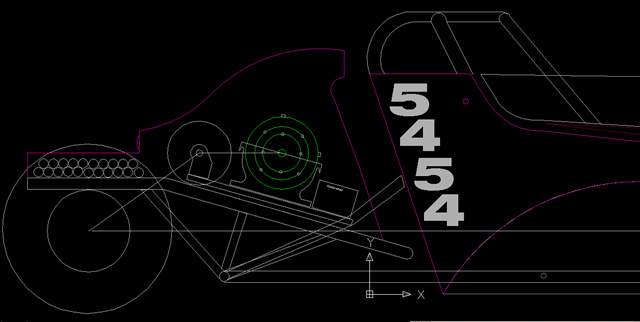 The following is a copy of the message you sent to Agni Motors via Agnimotors.com - Manufacturers of high efficiency D.C. motors

This is an enquiry e-mail via http://agnimotors.com/home from:
Randy DeYoung <randy@dremotorsports.com>

Can you send us more info on your motors and typical controller configurations. We ar looking at putting one of these on a NHRA Jr. Dragster which compete in an 1/8 mile long contest in three catagories by age group that cover the 1/8 mile distance in 3 ET catagories 12.90 sec., 8.90 sec. and 7.90 sec. with a restriction of 85 mph top speed. The car w/drivers weight between 275-450 running on gas/alcohol, not sure what an electrical combination might be. Any way any direction, information or samples would be appreciated.
Sincerely,
Randy DeYoung
DRE Motorsports

We think our motors would be very suitable for this. We entered our TTXGP motorcycle for a "demonstration" drag race over a quarter mile and got a time of a fraction over 14 seconds with terminal speed of 96mph. This bike weighs about 290kg (600lb) with rider, and has two Agni 95 Reinforced motors and two Kelly KDC72601 controllers. It has a battery of 10 kilowatt-hours, but to optimize it for drag racing it would have been better to use a much smaller battery with high discharge rate capability such as A123 cells or a number of lithium-polymer model aircraft batteries. For this drag race we had the current set to 100%, although for the TTXGP it was set to 66%. For drag racing almost any high-frequency DC motor controller is suitable; the throttle characteristics do not matter because you normally operate at the current limit for the whole run. Speed limiting is easy; you can set a limit within a few per cent by the choice of battery voltage and transmission ratio, or an extremely precise limit by having a tacho-generator fitted to the motor and an amplifier that compares the tacho-generator output voltage with a reference voltage and gives an output that reduces throttle to make the speed level off when the two voltages reach equality.

You did not say whether the weight of the junior cars is in kilograms or pounds. If it is pounds you would get a really good performance with one Agni 95 Reinforced motor, Kelly KDC72601 or Curtis 1221B controller and possibly 12 or 15 five-cell, 5AH, 30C model aircraft batteries connected as three in parallel and four or five in series; alternatively 150 A123 cells as 6 in parallel and 25 in series. If the weight is 275 to 400kg then you might need to double up the system. You would get good reliability with simple maintenance requirements.

Our motors would undoubtedly give very good results on these vehicles. We have studied your web site with great interest. Your variable-ratio pulley drive would probably make a considerably better performance possible with a given vehicle weight and battery, although it would need modifying so that it transmits the drive from zero rpm upwards and starts to shift ratio when the motor reaches 80 to 90% of the speed at which it runs without load on the battery voltage you use. It does not need to function as a clutch with the electric motor.

With a vehicle weight of 400 pounds you could also get a very good performance with just a plain chain drive from the electric motor to the rear axle of the vehicle. The ratio needed would be not very different from the ratio you are already using.

It is possible that we could be interested in your pulley drive for other applications, because we notice that it has the feature of applying pressure to the sheaves of the driven pulley by a helical cam rather than the spring used on most such drives. This will give it much higher part-load efficiency than drives using a spring, on which the pressure is at all times enough to transmit the maximum torque the drive is rated for.

One of the neat things about the Jr Racecars Shockwave Clutch is that they have an Overdrive clutch that we run on our dragster allowing our Higher torque big cubic inch alcohol motor run at lower RPM's at the finish line. I realize we don't need to run the clutch but the benefit would be that a driver (being that they are kids from 8-17 yrs old) could still drive the car the same as they would the fuel burning varieties. plus, staging the car and then free wheeling and braking at the top-end would act much the same as well. As I would believe that NHRA will still require separate hydraulic braking. The major importance in Jr Dragster ET racing is consistency and getting the car to run the same number or a calculable number (E.T. elapsed time) in the conditions it's in. So when ever heat of the day or the cool of the evening or humidity or dry air that greatly vary the performance of a naturally aspirated motor should be reduced in the electric world. Now how the electric motor, controller and batteries responds to heat and cold may too be an issue. A typical race day is two to three time trial runs and 1-6 elimination runs, the timed runs are only 7-13 seconds under full power. Total run time per run is probably 2-5minutes, drive to water box, burn out to clean slicks, drive to starting line, wait for other contestant, tree lights go down, probably 1-2minutes, car goes to full power for 7-13 seconds depending on class, speeds 85-45 depending on class for the distance of 660ft. then freewheel, then drive for another 1-2 minutes to exit the track and return to the pickup location. Cars may have as little as 10 minutes before its next run or as long as a couple hours. The goal would be to be able to make 10 runs over the course of a day, not have to change any batteries and have the car run within .001 of itself each time it goes down the track. So a programable controller that allows you to control the launch as to not apply to much power as to break loose the tires yet quickly ramp up to speed to meet the desired ET. Below is a graph from our tach/data acquisition device that shows you what a typical run looks like and a conceptual drawing of it's placement, based on a etek motor.

It should be quite easy to fulfil your performance requirements. There are controllers such as Kelly (www.newkellycontroller.com) on which the current limit can be programmed (using a normal personal computer) in increments of 1%, and if you choose a transmission ratio such that the motor voltage (which at a fixed current limit will be a few volts with the vehicle stationary, then rising progressively with speed until it becomes equal to battery voltage at maximum speed) does not quite reach the battery voltage by the time the vehicle reaches the finish line then the performance will not vary with battery temperature or state-of-charge until the battery is almost fully discharged. There will be a small but consistent variation with the temperature of the motor because the strength of the permanent magnets becomes slightly greater at lower temperatures and slightly less at higher temperatures; this will be directly reflected in the acceleration that is obtained at a given current. The temperature of the magnets will not change significantly during a run. The length of time between runs will not make a significant difference to performance.
If the Kelly controller is programmed to torque mode then the current limit can also be regulated by means of an adjustable stop limiting the travel of the accelerator pedal, without affecting maximum speed. (If it is programmed to speed mode, limiting pedal travel will affect maximum speed but not acceleration).

The battery capacity required to make 10 runs without changing or recharging the battery will be about 15 amp-hours with a lithium-polymer or lithium-iron-phosphate battery. A lead-acid battery would need to be about twice this capacity because a lead-acid battery does not give out its full capacity when discharged at a high rate.
It is possible to obtain regenerative braking with the Kelly controller and this will allow some energy to be returned to the battery as the vehicle slows down after the runs, particularly with a lithium-iron-phosphate battery which can accept charging at a high rate.

We are excited to offer you a glimpse of this year's Jr. Drag Racing's Team. We're preparing to campaign the DRE Motorsports Half Scale Superlite TF car at Bandimere Speedway and Pueblo Motorsports Park in JD2 Class for 10-12 year olds boys and girls.